My CV as sometimes requested by foreign showcommittees for publication on either website or in clubmagazine/showcatalogue.

I am single, I have 2 daughters and 1 grandson. I began breeding and showing with Persian cats but as their health was threatened by the increasing show demand for shorter faces I gave that up. Breeding and showing ended there, so everyone thought, until in 1988 a little red Cairn Terrier called Annic came into our lives as pet for a young family. She was a lovely bitch and as you can guess, she was shown one day and did very well. There it started all again! I now have a kennel of Cairn Terriers and show and breed with success. One of our Championship Show Winners was one of the first Dutch Cairns to be shown at Crufts when it became possible under the new Pet Scheme. She gained Reserve in a very strong Open Class under the late Ron Birch of the famous KinKim GB Kennels. 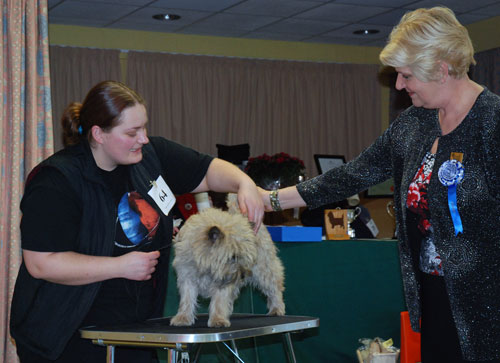 One thing lead to another, and in 1992 I began the difficult process of becoming a Show Judge, which in Holland is an entirely different system to that in England for example. In Holland (under FCI rules) you start with KK1, KK2 and E&B. Once you have those papers you can start judging at Open Shows and Club Shows which I did in 1994. If you do well you get invited to judge more and more and you can take breed exams one by one. Only then you can award CC’s. I am now a Terrier Group Judge and can also award CC’s to Griffons Bruxellois, -Belge and Petit Brabancon and Cavalier King Charles Spaniels : Group 9.

Judging Terriers, Cavaliers and Griffons is an extremely enjoyable activity and I am fully aware of the responsibility this involves. With a show report you are giving a judgement which can have various and far-reaching consequences. I fully support the system of writing such reports, whereby breeders can learn what quality of dogs they have (if they do not already know) and it enables them to give direction to their breeding. Judging without a critique is like a lottery; no prize, better luck next time. Winning or loosing without knowing why seems pointless to me. Therefore I am always prepared to explain my judging in case there are no written reports.

I am not an “old” judge, at least I don’t think so, but I am very “into” judging; it is close to my heart. As I still show frequently I also know what it means to win. I know that great feeling of showing a quality dog with type, temperament, sound movement and groomed to perfection.

I get the same feeling when I am judging and see a quality dog enter the ring.